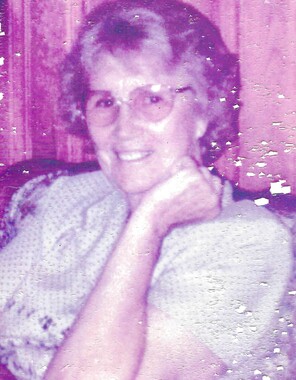 Back to Janie's story

Janie Gelene Smith Shedd, 95, of Blountsville, passed away at her home on January 24, 2020. She was born February 16, 1924, in Cullman County, to Roy Leonard and Dina McGinnis Smith.
Mrs. Shedd was a homemaker. She was also involved in several successful family businesses, alongside her husband, Ottis. Gelene was a member of Zion Grove Baptist Church. She was a faithful wife of 77 years as well as a loving mother, grandmother, and great-grandmother.
Gelene was preceded in death by her parents; her husband, Ottis L. Shedd; and her sister, Ezma Collier.
Mrs. Shedd is survived by three daughters, Carole Shedd Colvard and son-in-law, Robert; Linda Shedd Spike and son-in-law, David; Jacqueline Shedd Patterson; sister, Dottie Smith Woods; grandchildren, Robert Colvard, Jr. and his wife, Irena; Chad Patterson and his wife, Christie; Annie Spike; Genie Vons and her husband, John; Nikki Ryan and her husband, Matt; and three great-grandchildren, Brittnie Colvard; Carly Patterson; and Jackson John Vons.
Funeral services for Gelene are 1 p.m., Tuesday, January 28, 2020, in the Holly Pond Funeral Home Chapel, Pastor Brad Hadley officiating. Mrs. Shedd will be buried alongside her husband in Holly Pond Cemetery following services. Robert Colvard, Robert Colvard, Jr., Matt Ryan, John Vons, David Spike, and Chad Patterson will serve as pallbearers for Gelene, with Gary Shedd serving as honorary pallbearer. Friends may visit with the family, on Tuesday, two hours prior to services, from 11 a.m., until services begin.
Holly Pond Funeral home is honored to serve the Shedd family.
Published on January 27, 2020
To send flowers to the family of Janie Gelene Smith Shedd, please visit Tribute Store.

Send flowers
in memory of Janie

A place to share condolences and memories.
The guestbook expires on April 26, 2020.